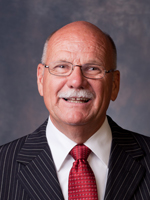 Pastor Rench was saved while a student attending the University of Arizona, in the fall of 1971 under the ministry of J.C. Joiner, New Testament Baptist Church in Tuscon, Arizona. He was called to preach

in the fall of 1972 during a revival meeting held on the campus of Pacific Coast Baptist Bible College in San Dimas, California under the preaching  of Evangelist Carl Hatch. Pastor Rench then graduated from P.C.B.B.C. with a Th.G. in 1975 and a B.A. in 1976.