The Word of God Concerning His Children, Government, and Conduct

I Timothy 2:1-4 I exhort therefore, that, first of all, supplications, prayers, intercessions, and giving of thanks, be made for all men; For kings, and for all that are in authority; that we may lead a quiet and peaceable life in all godliness and honesty. For this is good and acceptable in the sight of God our Saviour; Who will have all men to be saved, and to come unto the knowledge of the truth.

Titus 3:1-2 Put them in mind to be subject to principalities and powers, to obey magistrates, to be ready to every good work,To speak evil of no man, to be no brawlers, but gentle, shewing all meekness unto all men.

Romans 13:1 Let every soul be subject unto the higher powers. For there is no power but of God: the powers that be are ordained of God.

Proverbs 21:1 The king’s heart is in the hand of the LORD, as the rivers of water: he turneth it whithersoever he will.

Jeremiah 29:7 And seek the peace of the city whither I have caused you to be carried away captives, and pray unto the LORD for it: for in the peace thereof shall ye have peace.

Daniel 9:18-19 O my God, incline thine ear, and hear; open thine eyes, and behold our desolations, and the city which is called by thy name: for we do not present our supplications before thee for our righteousnesses, but for thy great mercies. O Lord, hear; O Lord, forgive; O Lord, hearken and do; defer not, for thine own sake, O my God: for thy city and thy people are called by thy name.

Secretary of the Interior David Bernhardt

Director of the Office of Management and Budget Russ Vought

Voting by biblical values is a Christian duty. It’s one more way to act as salt and light to our world.

If you have not registered to cast your vote as your small contribution toward biblical values, simply click below to register (it takes 5 minutes):

More detailed voting information being added as we receive it…

Psalm 139:13-14 Thou hast covered me in my mother’s womb.…for I am fearfully and wonderfully made: Marvellous are thy works;
Psalm 127:3 Children are an heritage of the Lord: And the fruit of the womb is his reward.

If God recognizes the life of a person inside the womb shouldn’t our leaders as well?

God clearly defines the life of a person as being at the moment of conception.

Should the government recognize life inside the womb?

If God recognizes the life of a person inside the womb shouldn’t our leaders as well?

Luke 17:2 It were better for him that a millstone were hanged about his neck, and he cast into the sea, than that he should offend one of these little ones.

Should anyone at anytime be able to take the life of a pre-born child?

God is the giver of life and has not given anyone the right to take it away without cause.

Should it be legal to be able to have a late term abortion?

Should anyone at any time be able to take the life of a pre-born child?

Proverbs 6:16-17 These six things doth the Lord hate: Yea, seven are an abomination unto him: … hands that shed innocent blood,

Should the government sponsor the killing of unborn children through late-term abortion?

God despises the killing of innocent unborn children regardless of the circumstance.

Should the government be involved in promoting and paying for abortions?

Should the government sponsor the killing of unborn children through late-term abortion?

1 Tim. 3:15 …that thou mayest know how thou oughtest to behave thyself in the house of God, which is the church of the living God, the pillar and ground of the truth.

Does the church have a higher value than places of entertainment?

The church belongs to God and He has given His word as the guide for all matters of faith and practice.

Should the government be allowed to tell churches how and when to worship?

Does the church have a higher value than places of entertainment?

Gen. 1:27-28 God created man in his own image…male and female created he them. And God blessed them, and God said unto them, Be fruitful, and multiply, and replenish the earth…

If God only recognizes a person’s born gender, should the government encourage sex-changes?

God loved us enough to give us the specific gender He designed for us to have at birth.

Should the government encourage sex-changes and sponsor the changing of genders?

If God only recognizes a person’s born gender, should the government encourage sex-changes?

Deut.16:18 Judges and officers shalt thou make thee in all thy gates, …they shall judge the people with just judgment.
Isaiah 5:20 Woe unto them that call evil good, and good evil;

Does God call us to appoint righteous judges who will hold to the values of His word?

God holds the leader of a nation responsible for selecting morally right and truth based judges.

Should the president appoint judges that will hold to constitutional and traditional values?

Does God call us to appoint righteous judges who will hold to the values of His word?

Gen. 12:3 And I will bless them that bless thee, and curse him that curseth thee: and in thee shall all families of the earth be blessed.

Is standing with Israel something God takes very seriously?

God will bless a nation that stands with Israel and will curse a nation who stand against Israel.

Should the US government stand with Israel?

Is standing with Israel something God takes very seriously?

Has God placed a priority on each person having the ability and means for self-defense?

God places the responsibility of self-defense on each person/family rather than solely on the government.

Should private citizens be able to choose which firearm to use for self-defense?

Has God placed a priority on each person having the ability and means for self-defense?

Rom. 13:4-5 …he beareth not the sword in vain: for he is the minister of God, a revenger to execute wrath upon him that doeth evil. 5 Wherefore ye must needs be subject…

Does God recognize law enforcement as a legitimate aspect of executing judgement against evil?

God places the responsibility of self-defense on each person/family rather than solely on the government.

Should the government redirect funding from the police to social services?

Does God recognize law enforcement as a legitimate aspect of executing judgement against evil?

For our county, there are no judges up for election. 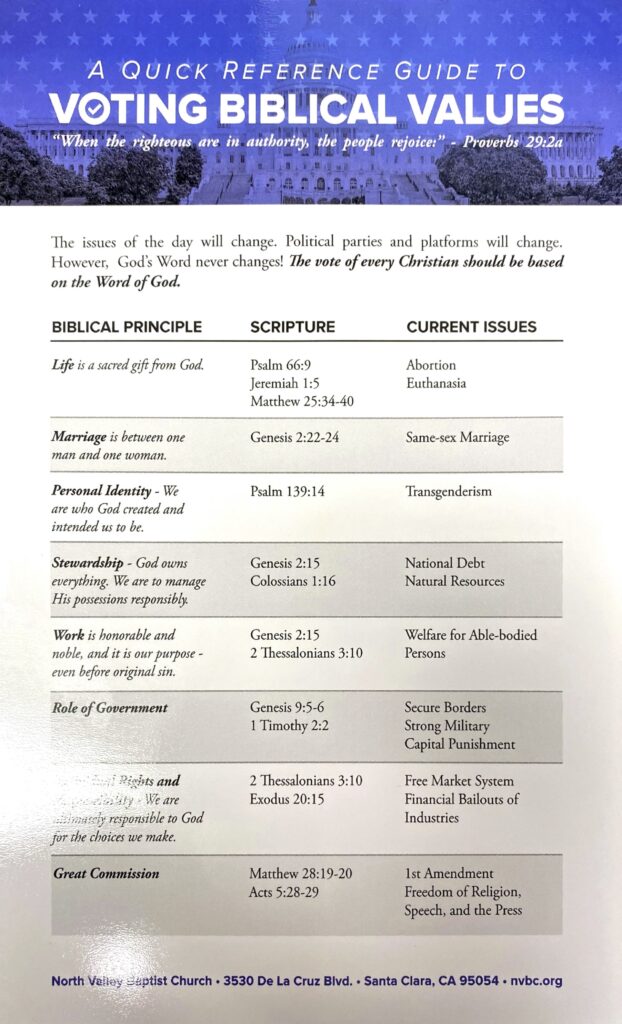 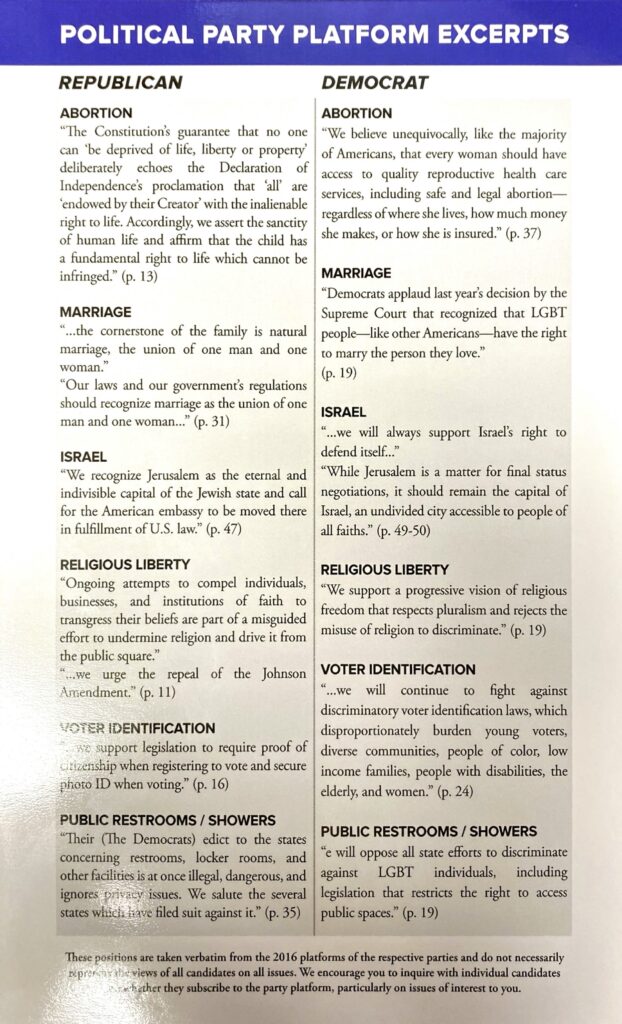